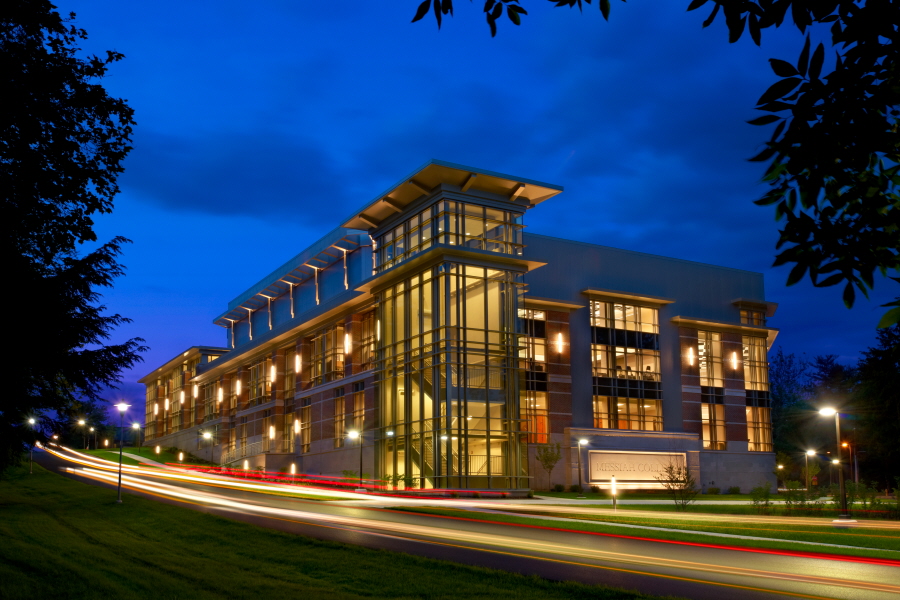 In 2005, our firm was hired to conduct an extensive feasibility study for the renovations and additions to a Worship and Performing Arts Center for a private liberal arts college in Central PA. The existing building was a 45,873 square-foot facility. The program was dictated by the college’s need to unify the Arts program into one facility and not duplicate functions by building on another site. The feasibility study determined whether the original program would be accommodated in a two or three-story building and at what cost, on a sloping triangular site bordered by two established campus roads. The second but related issue was how much area and volume the centerpiece, the performing arts hall, would require. Given the superior acoustics of historic ‘shoebox’ concert halls and using this plan shape for the hall, we determined how much of the building footprint could be maximized for a 1,300 seat hall. This was later reduced to 900 seats to eliminate a third level. The new two-story 83,957 square foot addition would bracket the existing facility. The renovations and additions included but were not limited to the new 900-seat performance / worship hall, rehearsal rooms, practice rooms, 125 seat recital hall, and other art, graphic and sculpture studios/classrooms, including faculty offices and support spaces. The renovation of the existing building included the conversion of the existing recital hall into a black box theater with a new gallery level. It also included support spaces such as dressing rooms, toilet rooms, control room, and passageways to the new addition. We were then asked to provide a conceptual exterior design study and renderings which lead to completing the Schematic Design in 2007. From there we were awarded the project to provide design development through construction administration services.